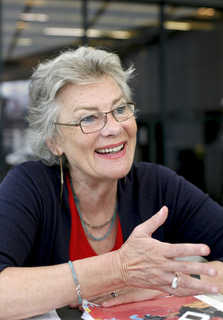 Moderator
The Humanitarian Sector in the Media - Worthwhile Struggle or Lost Cause?

Since 2001 Dr. Möhring is President of “Reporter without Borders Austria” defending Freedom of Information.

Candidate for the Head of the OSCE Institution Representative on Freedom of the Media, nominated by the Austrian government in 2009. Founder of the Press Freedom Award – A Signal for Europe for the support of democratically orientated journalism in eastern and south-eastern Europe, a prize awarded since 2002 in Vienna.

Longtime TV journalist, special correspondent and Representative of the Austrian Broadcasting Corporation ORF at the tri-national TV-channel 3sat. Since 2010 independent journalist and writer. Co-founder and moderator of the monthly TV-Talk Media-Quartett at okto-tv, Austria. Since 2011 constant blog “press freedom watchdog” on derstandard.at.

Born in Berlin, living in Vienna. Mother of two children.

2016 Golden Order of Merit of the Republic of Austria