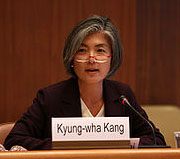 Prior to this appointment, Ms. Kang had been Deputy High Commissioner for Human Rights at the level of Secretary-General since January 2007. During her tenure at the Office of the High Commissioner for Human Rights (OHCHR) she had been responsible for the overall management of the organisation. Ms. Kang also led the establishment of OHCHR’s support structure for the Universal Periodic Review and chaired the United Nations Development Group’s Human Rights Mainstreaming mechanism.

Prior to joining the United Nations, Ms. Kang worked as Director-General of International Organization at the Ministry of Foreign Affairs and Trade of the Republic of Korea. She served as Minister at the Permanent Mission of the Republic of Korea to the United Nations from September 2001 to July 2005. During this period, she chaired the Commission on the Status of Women. Before joining the Foreign Office in 1998, Ms. Kang assisted the Speaker of the National Assembly of the Republic of Korea in the fields of women’s advancement and parliamentary diplomacy. Earlier in her career, she worked for the news bureau and the international radio bureau of the Korean Broadcasting System, and lectured in universities both in Korea and the United States.

Humanitarian Aid in between International Politics